This blog entry is the partner entry to this story: Week 1 Algebra 2 blog entry.  During the short week between Wed, 1/18, and Fri, 1/20, we launched two projects in my main preps: the Emerging Technology (or NSF) project in Integrated Physics and Engineering and the Sports Science Video project in Algebra 2.   The events in this article occurred concurrently with the events in this article.  To get links to accounts of earlier and later phases of this project go this page: A Tale of 2+ Projects. 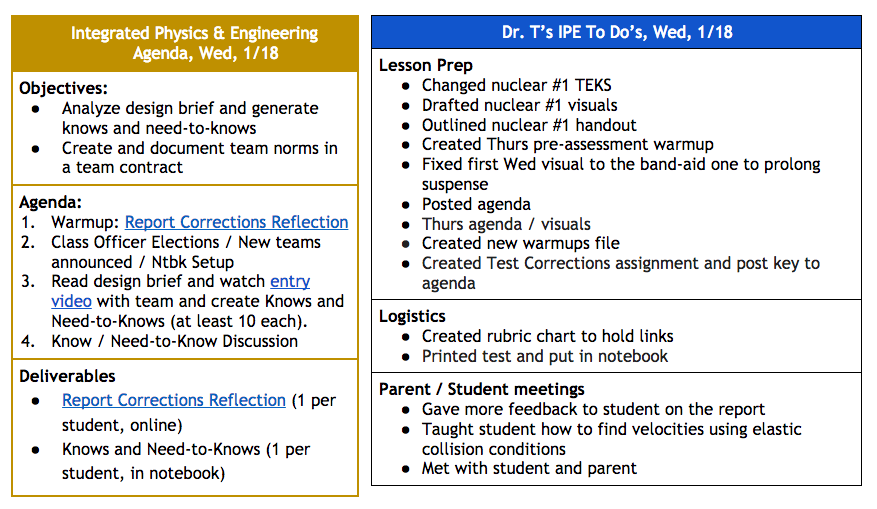 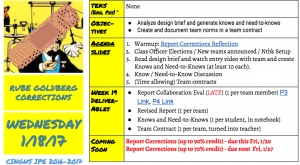 Students in IPE were greeted with this visual when they arrived in class in Day 1 of the Emerging Tech project.  The branding on this agenda slide shows the icon from the previous project with a bandaid over it.  This reinforced the warmup for the day which was a reflection on their past report scores and their plans to use report feedback to raise their scores that week.  In the IPE class, student work is graded once a week: notebooks are graded on Friday’s and major products submitted online are graded on Sundays.  Students have up to 2 weeks to revise their work: after 1 week, they can earn up to a 90% on late or resubmitted work and after 2 weeks, they can earn up to 70% on this work.  After 2 weeks, my co-teacher and I no longer accept the work.

After the students completed the report reflection warmup, we held our once-a-6-weeks Class Officer Elections.  Nominated students gave speeches to earn student votes in elections for 3 officer positions: Facilitator, Time Manager, and Grade Manager.  The facilitator goes over the daily agenda at the start of class each day.  The time manager tracks the time left in class activities and class periods and provides periodic time announcements describing the amounts of time left for activities and left in class.  The grade manager uses a weekly task completion chart to follow-up with students who did not turn in assignments.  All 3 officers support the class when I’m sick.  Subs who have taken over my classes are usually just adults on record who take attendance and watch while my 3 officers lead students through the day’s activities.  Three of my Algebra 2 officers that were elected earlier in the morning during 1st period managed to get elected in the same positions in their IPE class periods. I allowed them to run for office again because I enjoy having experienced and committed class officers.

After the officer elections, we announced teams.  The teams claimed new team tables to serve as headquarters for their new teams.  They used the visual below to set up their notebooks for the next project. 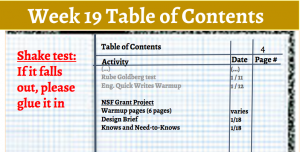 We explained to them that we were going to do a project in “Advanced” Physics and Science topics.  We explained that “advanced” in this context did not necessarily mean more difficult.   What it really means is that it involves science discovered “later” than much of the science we had studied throughout the year.  We also explained that the National Science Foundation (NSF) has a very large budget (order of billions) which it allocates to science and engineering proposals with the power to advance our understanding of science (intellectual merit) and to improve our society (broad impact).  We explained that the goal of the project was to create an NSF proposal that involves emerging technology that has intellectual merit and broad impact.  To give them an idea of some the problems they could address in their proposals, we watched a video about the NEA Grand Challenges in Engineering. 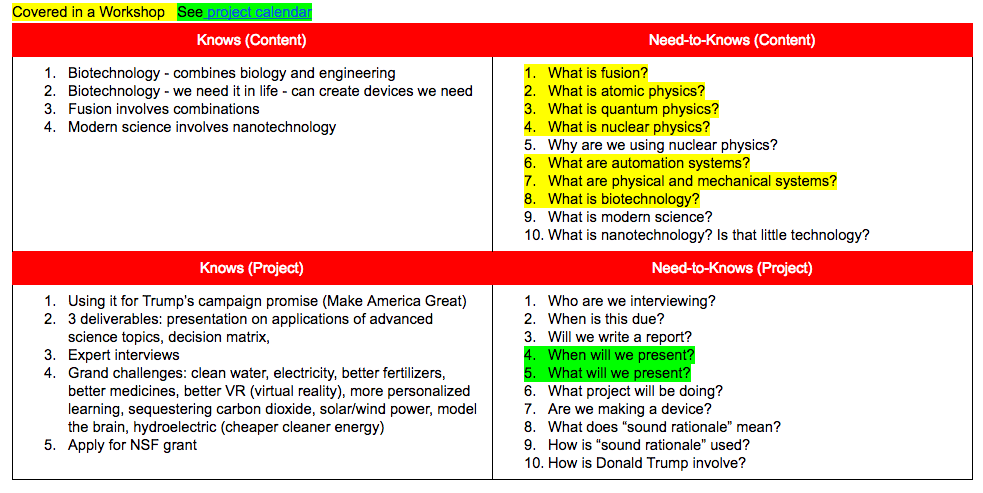 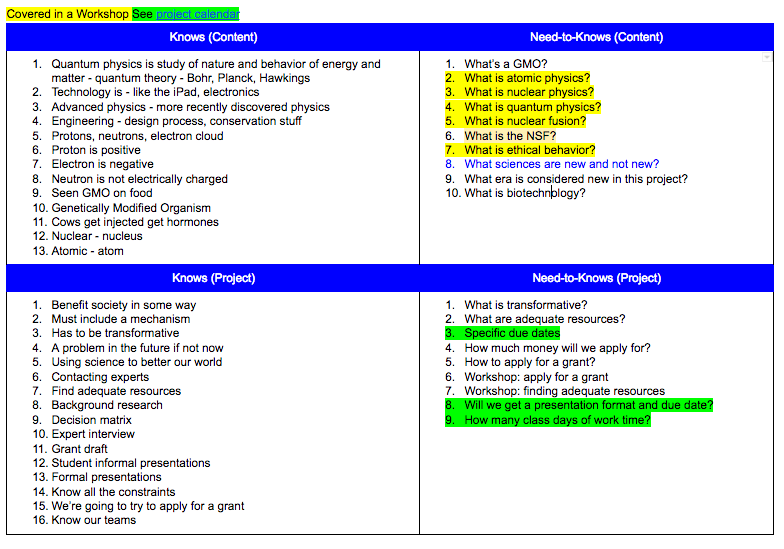 While they shared their prior content knowledge in their Content Knows, I appreciate how the 4th Period students gave me a brief summary of what they remembered about atomic theory and what they knew of GMO’s.

Later in the day, I prepped for activities later in the week by continue to conduct research and to draft visuals and question prompts for my first workshop on Nuclear Physics for Day 3 of the project.  While reviewing the nuclear material I decided that the way to chunk the Nuclear Physics was into 2 parts.  Part 1 would focus on the strong force, energy-mass equivalence, fission, and fusion and its applications.  Part 2 would focus on radioactive decays (alpha, gamma, and beta), the weak force, the idea of half life  and applications of radioactivity.

I also prepped a Test Correction assignment because trimester exams are in 5 weeks.  In this activity, students use a key to correct their test using a colored pen or pencil different from the color they used in the test.  The color contrast helps students know what concepts they need to revisit when they study for their trimester exams. 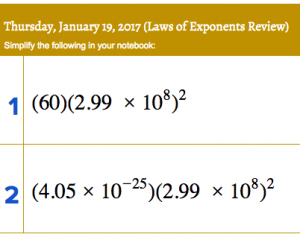 On day 2 of the NSF project, students did a warmup that reviewed Laws  of Exponents.  I designed the warm-up problems to take on the same form as the energy-mass equivalence (E = mc^2) problems we would introduce the following day.  This warm-up gave us the opportunity to review laws of exponents and putting final results into scientific notation.

After the warmup, the students created their team norms and agreements and documented these in a team contract using this template.    They also set up their Google folders and shared them with their teammates.  On this day, we started the useful practice of adding the team number to the name of the Google folder.  We linked their Google folder links to the project rubric chart:

The rubric chart is our one-stop-shop for all the electronic work students submit for the project.  It also contains text from all the project rubrics (see left column) and has column boxes which we populate with yellow (partial credit) and green (full credit) stamps as each team completes parts of the rubrics in their products.  After the students set-up their team folders and team contracts, we gave them time to work on their test and report corrections to wrap up class Day 2 of the NSF project.

Later in the day, I prepared for Day 3 by finalizing my lesson outline, lesson visuals and lesson handout for Nuclear Physics (1 of 2).  To really focus the lesson, I referred back to my analysis of a test bank aligned to my target TEKS.  This analysis led me to focus my lesson on binding energy, mass defect and how these relate to fission, fusion and mass-energy equivalence.  In addition I found this great gif that illustrates the chain reaction that occurs with uranium-235:

On Day 3, I facilitated part 1 of 2 of a workshop on Nuclear Physics.  Because our previous project had focused on conservation of energy and momentum, I integrated questions in the workshop that tied the new forces (strong forces) and new energies (binding energies) in nuclear physics to concepts we had already learned in previous projects: energy transformations, Coulomb forces, potential energy, and kinetic energy.  We learned about the role of the strong force in the stability of atomic nuclei.  We learned how to calculate the mass defect and the binding energy using E = mc^2 where E is energy, m is mass, and c is the speed of light.  We learned about fission and fusion, their connections to the strong force, and technological applications of each.

Later in the day, I graded all the Week 19 assignments in students notebooks.  I also learned how to install a TI-83 emulator unto my laptop so I could model how to do calculations with very large and very small numbers in our class set of scientific calculators.

Over the weekend, I prepared for Week 2 of the NSF project by setting up a rubric, research questions and suggested sources for presentations students would give on nuclear and quantum physicists. 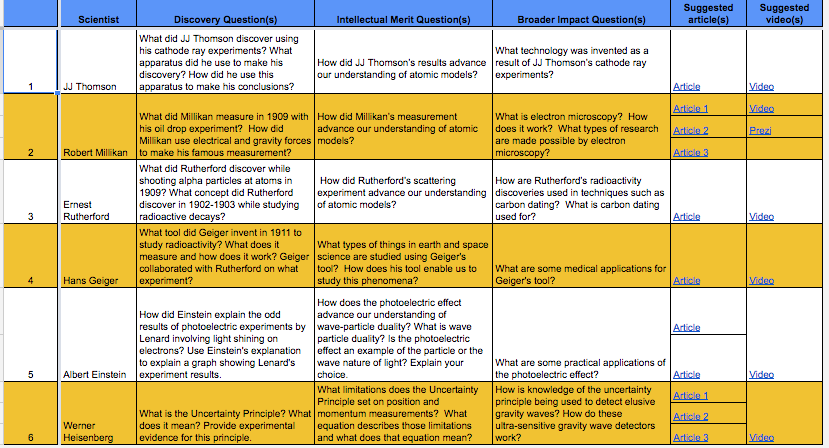